Amid scenes of chaos for several months at Ben Gurion International Airport, the Israel Airports Authority on Sunday recommended that travelers drop their suitcases when they go on holiday this summer.

Ofer Lapler, spokesman for the Israel Airports Authority, said the airport was short of 1,400 workers and advised passengers to “be patient” when flying out of the country.

He advised people to bring small suitcases on wheels that could be taken on board as hand luggage, rather than larger pieces of luggage that must be checked in.

Lapler also asked several to consider working at the airport to ease congestion, claiming it is “a great place to work.”

The shortage of staff has led to chaotic scenes at Israel’s travel hub since travel restrictions were largely lifted in March and large parts of the world have opened up to tourists.

In addition to the problems at Ben Gurion Airport, El Al customers have recently faced a number of cancellations while pilots go on strike to demand that the company return wages to pre-COVID levels.

Passengers arriving at Ben Gurion’s terminal 1 have been forced to wait in queues that extend out the door, while main terminal 3 has seen that the departure hall is packed to the limit.

Lapler said that since March, Ben Gurion has seen a 340% increase in passengers and flights. He further added that the Israel Airports Authority has committed to handling only existing flights and is resisting pressure to add more flights during the current peak season, which ends in October.

Lapler noted that there were staffing problems at airports and airlines in a number of countries, and said that Israel was in fact in an “excellent position”.

At London’s Heathrow airport, a fault in the luggage system on Friday led to a two-hour waiting time for passengers at baggage claim, which resulted in luggage piling up at one of the world’s busiest airports; some travelers were forced to board connecting flights without luggage. 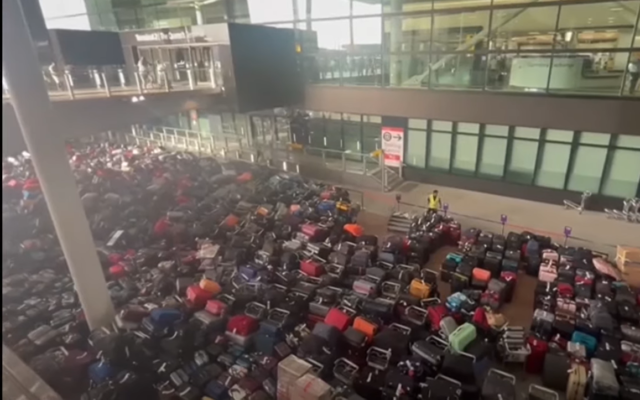 Suitcases pile up at Terminal 2 at Heathrow Airport after a fault in the luggage system, June 17, 2022. (Screenshot / YouTube)

And Gatwick Airport, London’s second busiest, has been forced to limit activity in August to 850 departures and arrivals a day, 10% below the peak before the pandemic.

The UK Department of Transport and Civil Aviation wrote an open letter to airlines last week requesting that airlines cancel flights in advance instead of at the last minute.

Meanwhile, NBC News reported that 6,500 flights were canceled in the United States on Thursday and Friday, with almost 12,000 flights delayed. US Secretary of Transportation Pete Buttigieg has asked tourism leaders to find solutions to the disruption, with concerns about mass cancellations for the weekend of July 4.

Of course, we’ll remove all ads from your site and you’ll have access to fantastic content that’s just for the community. But your support gives you something deeper than that: the pride of being part of it something that really means something.

Travel off the beaten track in Japan, to the point where three prefectures meet